Pipe character in a table field

I’m trying to copy the table that is shown in the page https://nmap.org/book/scan-methods-ip-protocol-scan.html and the output of the nmap command shows the value open|filtered, however, when trying to add the value like that in the table, it just causes for the first tick and word to appear and the rest is not displayed.

I understand that it’s caused by the pipe character, I thought that adding it within a code block would have avoided the situation, but that’s not the case.

Wondering if this might be an issue with the interpretation in Inkdrop or just Markdown in general.

In a note, add the following text

The expected output (taken from https://parsedown.org/demo with the text above) 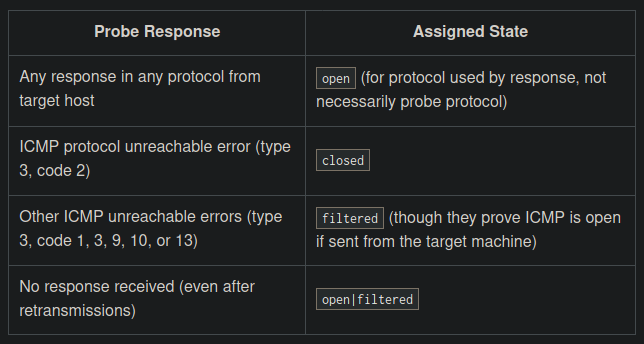 Thank you for the report.
It looks like a bug in the markdown parser.
I’m using remark to render markdown. I’ll look into it and report it if it’s not solved yet.