As you know many updates have been made so far but there are still a handful of ideas to improve it more.
Fortunately I am keeping myself highly motivated because I can see you are enjoying it

Recently, I was thinking of the next roadmap of Inkdrop.
I would put my efforts where it will have the most impact on the user, in terms of features.
So I decided to share my draft idea.
Please drop lines to let me know your thoughts and let’s discuss which features should be added!

These candidates are absolutely nice to have but I would pick some of them in order to make the roadmap compact.
Remained candidates will be considered again after finished it in the future!

The mobile app is built on top of React Native, so the most of codebase is shared between them.

It doesn’t have features that the desktop app already has:

And there’s a problem that the editor is loaded too slowly since its implementation is web-based. It’s necessary to be pre-loaded somehow.

Currently the mobile app has several problems.
One of the problems I’m experiencing on iOS is that the editor sometimes crashes and it turns into white blank screen for some reason.
CodeMirror is kind of unstable on iOS so the editor is necessary to rebuild from scratch for the mobile platforms.
It is kind of hard but we need it.

Android version needs to be improved its look and feel.
It doesn’t conform to the Material Design guidelines so it doesn’t really look or feel like an Android app.
This is because I’m an iOS user.

Matthew suggested me to check out Google Inbox as a good example of Material Design implementation.

Currently it is not universal, so it will be just zoomed in to the screen size if you run it on tablets.
It seems like just a matter of UI implementation.
I think it’s good to have a UI with three columns like the desktop version.

I have heard the same request from many users who want a support for vim keybindings.
Actually I am a vim user, too and I understand it makes sense to support it.

I’m so happy to know that Chris was trying to make a plugin for it.

I’d like to make it by myself because I noticed that when the vim mode enabled it conflicts default keybindings of the editor such as editor:new-line so these keybindings need to be overridden. You need some internal knowledges to solve this issue.

It seems like many people love task list feature of Markdown.
I love it, too.
So it would be convenient to have a count of remaining tasks displayed on the note list, similar to what is displayed on GitHub issues.

Since I am Japanese I didn’t realize it’s important when you write texts in English.
Inkdrop is for taking notes regarding programming but is also often used for writing texts about project and work.

There’s a plugin to add spell check support for CodeMirror:

It could be just a small plugin.

Tell me what you think

If you have an idea not listed here, don’t hesitate to post it!

I’ve only been using InkDrop for a few months but I am a big fan. And your current list of improvements can only make the app that much better.

I only have a few minor requests:

Thanks for the great app and being open to new suggestions. 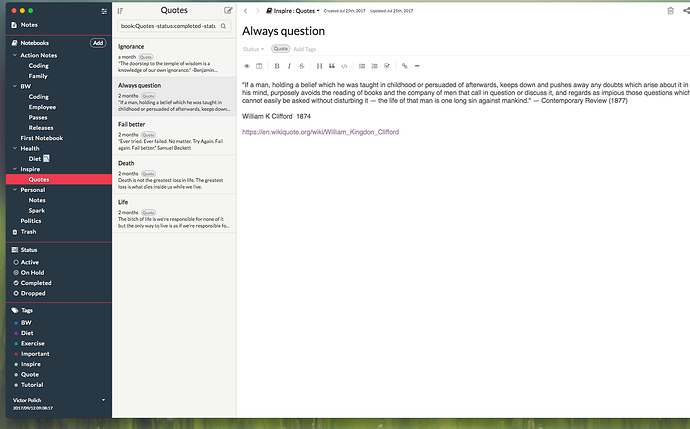 For me the biggest feature I would like to see is a snapshot or history of all notes through time. If I delete a note and change my mind, I can recover it. If within a note I want to revert back to what it was previously, I can backtrack through my changes.

Out of curiosity, have you ever had a look at slate.js? It looks really powerful.

Out of the suggested candidates, the one on task progress view would interest me the most.

In any case, great work on Inkdrop. It’s my go-to note taking app!

OK - just found the Paste as Plain Text in the edit menu. Was expecting it to be in the right mouse click context menu.

Hi @anon25363521,
That’s great to know you enjoy Inkdrop!
Thank you for your feature requests.

Thanks again for joining the discussion!

Thank you for the suggestions!

Export as PDF feature is definitely necessary as a basic feature!
Exporting note with theme styling is nice to have but may be an optional feature, so I’m afraid that the priority would be low.
Yes, it already provides “Paste as Plain Text” but not in the context menu. I will add it in the next release, thanks!
A shorthand for generating tables is very cool. I don’t know the ETA but I will remember it!

Note change history is nice to have, but in my experience with Evernote, I guess it will be not so often used despite the fact that it would be a hard work to implement it.
When it comes to the implementation, Inkdrop actually has already the change history in its local storage. It means that it’s possible to track back document revisions without changing data models. But there is a problem that old revisions won’t be synced via network by design of CouchDB.
I need to know how many people want it in order to understand how important it is for users.

Wow, I didn’t know slate.js! It looks great and being very actively developed. I’ll look into it, thank you for letting me know!

Task progress view is your most interested feature? Sure, I see!

First post and I am not an active community member, so forgive me if I’m repeating a request already made elsewhere. But I would love to see wiki style linking. [[link to my new note]] even better if it has green/red syntax highlighting for whether or not the linked note exists yet or not.

Thank you for your suggestion!
I understand the wiki style linking is useful for writing documentations but I’m afraid that it would break Markdown compatibility.
Inkdrop is Markdown note-taking app, so it can’t have a syntax not compatible with it.

Thanks again for your thoughts!

I think you could accomplish this within the confines of markdown. Maybe when the user types links in this fashion my new note you attempt to link them to existing notes or create a note with the my new note title if none exists.

Understand if it’s outside of what you want to include. I’m pretty sure I can accomplish something very close with just a little bit of hacking thanks to the plugins and API.

You are right. It’d be nice to be a plugin.
I think the problem is that notes have unique note IDs like note:S1e74D2kFZ and you have to generate one for new link.
You can’t depend on note title because there are also potentially multiple notes with same title.
So it seems to be kind of tricky since Markdown and Inkdrop are not specifically designed for Wiki-system.

We are discussing an idea which is related to sharing an entire notebook: Write blogs with Jekyll.
You can extend sharing feature like this by writing some code using data access API.

Based on the usage statistics, it looks like sharing feature is not so often used for now.
Since this app is not aimed for team works, sharing features would be supplementary.
I would like to focus on making it more comfortable for writing.

Thanks for your suggestions!

In my experience, as student, I believe that could be a great advance:

— spell check (not only english)
— personalized status
— reminders for notes (as evernote)
— text hightlight (I’m not expert, but i’m sure that markdown allow it)
— a good attach system (as zim-wiki)
— WYSIWYW editor (for sure, technically complicate, as zim, typora, write!)
— latex support (as markdownnotes[dot]com)

Thank you for the suggestions

spell check (not only english)

Unlike tags, note status is tied with the app’s view logics (Completed and Dropped notes are hidden from the note list by default).
Custom status would break its consistency, so I’m afraid to say no.
Please use tags for adding your custom task status.

reminders for notes (as evernote)

This feature would make the app more comprehensive as a note-taking app like Evernote.
As the candidate features listed here, I’d like to focus on making writing notes more comfortable in this stage.
Inkdrop’s value is its simplicity. To keep it simple, I’d like to leave other features to plugins as possible.
The plugin documentation is not enough yet though, I’m planning to write it in the future.

You can highlight text with *italic text* and **bold text**. Cmd-I and Cmd-B should help you input them.

For those who are not familiar with Markdown, it makes sense to have a rich editor so that they can write notes without learning Markdown syntax.
But Inkdrop’s target is Markdown fans and developers since its first release, I’m afraid that Inkdrop is focused on writing Markdown with a plain text editor.
In this concept, vim keybinding makes sense to have.
I also love WYSIWYW editor like Bear but as you can see it would require a lot of hard work.
I’d like to improve it as a plain text editor for this reason.

If you are searching for LaTeX equations support, please try math plugin.

Thanks again for your thoughts!

Thank you so much for sharing your ideas and it was very helpful.
After considering your suggestions, the next roadmap has been decided.
I wrote it on our blog here, please check it out:

This topic is going to be closed but please feel free to post your idea as separate topics.